Contribution: The Case of the Aquarium Dolphin Honey 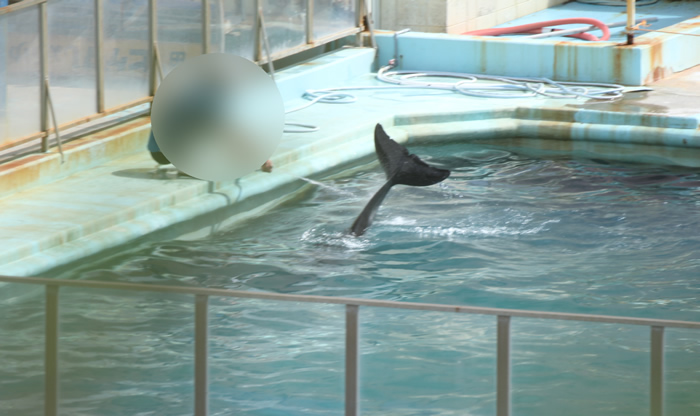 Translated article from “My Viewpoint,” a reader comment published in the Asahi Shimbun, January 11, 2019

Sakae Hemmi, former researcher at the Institute for Environmental Science and Culture

Honey the dolphin has been left alone in her tank. One year ago the Inubosaki Marine Park Aquarium in Choshi City, Chiba Prefecture closed, and no buyer has been found for the facility. Locals and others have been running a campaign which involves sending petitions to the relevant authorities in an effort to save Honey from listlessly floating in her pool of murky water, and the situation is being closely watched in Japan and abroad. Because Choshi health authorities have conducted only visual inspections, no scientific conclusions can be drawn about pool water quality or whether Honey’s health has improved, but the cracks on her back have healed and she was seen swimming on a recent day. But this is not a fundamental solution. Two serious problems lurk behind Honey’s situation.

First, measures are needed to help dolphins which, like Honey, have nowhere to go or are no longer useful to aquariums. Japanese aquarium facilities and the dolphins kept in them are aging. Dolphins which can no longer be used in shows because of old age or because they could not be tamed are isolated in pools away from the public eye as “deadwood dolphins.” Being hidden away puts them in even more miserable environments than Honey.

In 2015 the Japanese Association of Zoos and Aquariums (JAZA) decided that restocking dolphins should be accomplished by in-facility breeding, and prohibited facilities from accepting wild dolphins that were captured in drive fisheries. While this was a groundbreaking development, it was already known that breeding has its problems. In other countries, aquariums and other facilities have stopped keeping dolphins, and some facilities are running “dolphin home projects” which move the animals to near-natural conditions and take care of them for life. Additionally, a “dolphin sanctuary” will apparently soon become a reality. JAZA should anticipate the future while taking such international trends into consideration.

The second problem is that aquariums which either left JAZA or were never members have since 2015 continued the exhibition of dolphins captured in drive fisheries and their use in shows. Even now, facilities which are not JAZA members continue restocking with wild dolphins on the grounds that JAZA restrictions do not apply to them. A JAZA member remarked, “The very idea that depleted fish and dolphins can be replenished from the natural world could lead to thinking which sees little value in life.” One aquarium manager said that keeping dolphins there is “a necessary evil.” While aware that it is an “evil,” that aquarium will continue to capture wild dolphins in order to pander to the crowds.

Part of the responsibility for Honey’s situation is found in the idea that human entertainment is more important than the lives of wild animals, and in the perception shared by many people that exploiting animals is pardonable if it’s “for scientific research.” The Honey problem isn’t just a problem involving dolphins and dolphin businesses. It’s a matter of the “dignity of life,” that is, how we humans see the lives of non-human beings.