While cosmetics companies are responsible for the safety assurance of their products, animal testing for cosmetics is not required by law. However, if ingredients of ultraviolet absorbing or scattering agents, tar colors, or preservatives need to be newly included in the positive list (request for revision of the Cosmetics Standards), safety test data is required.
For quasi-drugs, safety test data is required when new ingredients would be added.
Both cases can employ established alternative methods, but for cases without established alternative method, animal testing is inevitable. In addition, it is not prohibited to conduct animal testing for a case which can be conducted by alternative method.

Well-known brands declared to discontinue animal testing grant two exceptions: 1) exports to China where animal testing is a prerequisite and 2) response to user-reported problems. A good example of the latter case is Kanebo whose skin whitening products made thousands of users suffer from leukoderma – a loss of skin pigmentation. In order to clarify the cause, they have to employ animal testing, which is also requested by the government.

New alternative methods are validated by JaCVAM (Japanese Center for the Validation of Alternative Methods) in Japan. If a cosmetic company has to submit safety test data in response to the government’s request, it is strongly recommended to employ alternative methods with JaCVAM’s guidance document.

No Regulations for Animal Testing

In Japan, anyone can establish an animal testing facility freely without permit or registration. Penalties, official investigation systems, and reporting obligation don’t exit. Because of this, we cannot find out how many animals are used for testing.

JAPAN’S CHALLENGES TOWARD BAN ON ANIMAL TESTING FOR COSMETICS

Major cosmetic companies are strongly inclined to discontinue animal testing, awareness of consumers in this issue of this issue is low. According to the survey conducted by Lush Japan in cooperation with CFB member groups in June 2016, people who have heard of animal testing for cosmetics was 28.7% of the total respondents.

However, more than 70% of them answered that they do not want to make animal suffer once they found out that animal testing for cosmetics is conducted. 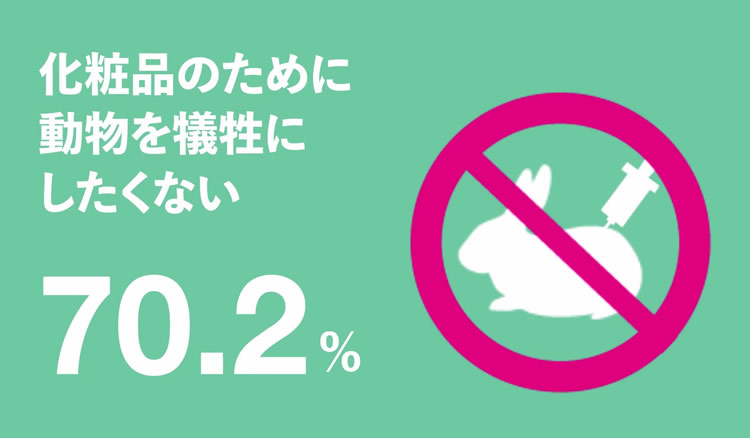 Do not want to make animals suffer for cosmetics: 70.2%

Due to low awareness among consumers, the government and trade organizations have little interest in the issue and are not keen to offer necessary support. Naturally, they lack budget allocated to developing alternative methods and adequate manpower. Nevertheless, in this coming November, an international conference named Asian Congress 2016 on Alternatives and Animal Use in the Life Sciences will be held in Karatsu, southern part of Japan backed by enthusiastic people who are concerned about this issue.

Whether Japanese consumers take action, collaborate with scientists and researchers to end animal testing, and influence the government are tasks ahead.